In It’s All About the Bike Robert Penn takes us on a tour of bicycle history, one that declares for the tradition, lore and beauty of bicycles , while pursuing the perfect bike for himself — a bicycle to love and respect, that isn’t mass-produced and that is one to grow old with.

Weaving effortlessly between personal stories, introductions to renowned and respected cycling craftsman, and sections about bike geometry, ball bearings, steel roller chains and the evolution of bicycles from the boneshaker to the safety, among the many topics he touches on, Penn pens a devotional to one of humankind’s greatest inventions.

"An invasion of armies can be resisted, but not an idea whose time has come." — Victor Hugo

Penn’s bike purchasing journey is a monument to cycling and an experience to savor. He starts with the frame, the principal element of a bicycle and one that hasn’t been dramatically improved upon since the diamond frame arrived in the 1890s.

"Made to measure and hand-built by an artisan frame-builder" Penn’s bike is to be steel — the benchmark of excellence in the peloton for forty years. And to make this point, Penn rides tempo through a short, fulfilling and informative history of steel, in particular Reynolds frames, the frame of choice in 27 Tour de France wins, including victories by Jacques Anquetil, Eddy Merckx, Bernard Hinault, Greg LeMond and Miguel Indurain.

Penn takes time to talk about the importance of frame geometry in how a bicycle rides and how geometry is an intrinsic part of a bespoke bicycle. His bike is designed to fit his body and is to be an extension of his body and soul. He intends his machine to be the embodiment of devoted craftmanship, attention to detail and history.

Moving into chapter two, Penn places his hands in the drops of his bars to talk about...handlebars. But he begins by talking about the Draisine.

Invented in 1817, the Draisine was the first prototype bicycle, but it was actually more of a striding and coasting machine — a historical Strider made completely out of wood.

The addition of rotary cranks and pedals to the front wheel of the Draisine occurred in the 1860s and transformed this mechanical horse into the velocipede.

Because the pedals on the velocipede attached to the front wheel, the handlebar had to be braced against the side-to-side effect of pedaling. This impediment to steering remained until 1885 when the safety bicycle was introduced with pedals attached to the rear wheel via a chain, which is the moment Penn takes us back to his bike. 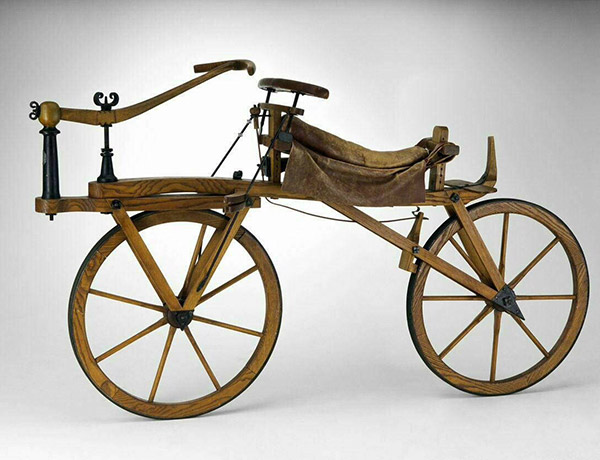 Invented in 1817, the Draisine was the first prototype bicycle

The headset will be Chris King, the handlebar and stem will be Cinelli, and the reasoning involves a brief history on the importance of ball bearings, an aside about the cycling culture in Portland, OR, an explanation of fork rake and a salute to the world’s first organized bicycle race, Paris-Rouen — an event the fictional inspiration of the 719 Ride participated in.

In chapter three, All Geared Up, Penn touches on why the high-wheeled ordinary, or penny farthing, evolved. He provides a summarized history of the invention of the steel roller chain and sings the praises of Tullio Campagnolo and Campagnolo componentry, which of course will “supply the kinetic soundtrack” of his future. Bottom bracket. Rear derailleur. Cranks. Chainrings. Brakes. Integrated shifter/brake levers. And an 11-speed cassette. Bellissimo!

Chapter four, The Lateral Truth, presents the truth that a bicycle is not a bicycle if it doesn’t have wheels. Wheels transform a seat attached to tubes welded together in an odd shape into something special. And with hand-built wheels on Penn’s bespoke bicycle, every revolution of the Royce hubs and Continental tires, will sing a song of perfection honoring John Boyd Dunlop, the inventor of the pneumatic tire and Edouard Michelin, the inventor of the detachable, changeable tire.

After touching on the birth of mountain biking in Marin County and a ride down the Repack course with some of the founding fathers of the sport, Joe Breeze and Charlie Kelly, Penn takes us through the relationship of spoke to wheel to bicycle and the beginning of that relationship in the 1870s.

Finally, in chapter five, Penn settles into his Brooks Team Professional saddle to share about the heyday of six-day racing and to discuss the anatomy of saddles and the craftsmanship and process of making Brooks saddles in particular.

It’s All About the Bike is truly all about bicycles. It’s a great experience. Informative enough to be a great resource for understanding something about everything on and about the bike, but not too academic to throw you off the bike.

From wheel building to saddle construction, from headsets to spokes, from Paris-Rouen to Marin County, Penn delivers a mature winning performance that can be appreciated for its simplicity, elegance and manner. This victorious book appreciates in value over time and is a monumental trophy to have on your bookshelf.

If you've ever experienced a moment of awe or freedom on a bicycle; if you've ever taken flight from sadness to the rhythm of two spinning wheels, or felt the resurgence of hope pedaling to the top of a hill with the dew of effort on your forehead; if you've ever wondered, swooping bird-like down a long hill on a bicycle, if the world was standing still; if you've ever, just once, sat on a bicycle with a singing heart, then you share something with Robert Penn—you know it's all about the bike.

Author Biography Inside the Book Cover

Robert Penn has worked as a lawyer, waiter, contractor, DJ, photographer, and journalist—and has biked to every single job. He writes for the Financial Times, the Observer, and Condé Nast Traveller, as well as a host of cycling publications. Penn lives in Wales with his wife, three children, two spaniels  and six bicycles.

Follow @719Ride on Instagram
Posted in Book Reviews and tagged Cycling history
← Pedalare! Pedalare!A Race for Madmen →
×
Scroll To Top
We use cookies for analytics, e-commerce and advertising purposes. The cookies allow us to understand how you use our site and to optimize your browsing experience. They don't contain any calories, so they won't affect your ability to ride uphill. However, we may share your site usage data with our social media, advertising and analytics partners. You agree to our use of cookies by closing this message box or continuing to use the site. I accept your cookies.I spit on your cookies.I want to read the privacy policy.