The Meaning of Orange in Cycling

The Meaning of Orange

Orange is a bold, invigorating and adventurous color, both spontaneous and confident. It grabs attention, demands respect and calls to mind change, movement, and transformation. Its liveliness and edginess are associated with daring creativity and enthusiasm.

The fiery nature of orange is powerful, strong and enduring. It represents determination and success, and its intense energy communicates health and vitality.

The vibrance of orange is uplifting and encouraging. It’s an organized color that promotes critical thinking, stimulates concentration and enhances focus.

The Science of Orange

“Research has found that orange increases oxygen supply to the brain, produces an energizing effect and stimulates brain activity.”1 Research has also shown that orange positively effects circulation and the nervous system.2

If cyclists had previously known about the stimulating effects of orange, they surely would not have resorted to amphetamines, caffeine, opiates, ether, cocaine, chloroform, strychnine or the other pharmacological enhancements — la bomba or le pot belges — prevalent in the peloton since the dawn of cycling.

Although research has not yet shown that the fiery nature or an orange jersey heats up your legs, gets the blood flowing and enhances cycling performance naturally, some truths don’t need to be proven.

The Encouragement of Orange

Orange is a brightly enthusiastic color. It’s boisterous, exuberant and full of enthusiasm. Think of the shouting, cheering and morale-boosting rowdiness of corner seven on Alpe d’Huez.

The annual gathering of Dutch at the church of Saint-Ferreol d’Huez (Église Saint-Ferréol) during the Tour de France has made corner seven and Alpe d’Huez one of the biggest parties in cycling and branded the iconic climb “The Dutch Mountain.”

“The color orange refers to the Dutch Royal Family, the House of Orange-Nassau. Their ancestor, William of Orange, is the founding father of the Netherlands. Orange symbolizes national unity, and the Dutch signify national pride by wearing orange.”3

The vigorous Dutch encouragement on The Island of the Sun stems from the Netherlands’ athletic success on The Great Wall of Oisans.

The Great Wall of Oisans is home to the Alpe d’Huez ski resort nicknamed The Island of the Sun (L ‘ile du Soleil) for its reputation as the ski resort with the most sunshine each year.

From 1976 to 1983, the Dutch prevailed on Alpe d’Huez six times. Joop Zoetemelk, Hennie Kuiper and Peter Winnen each triumphed twice, and Steven Rooks and Gert-Jan Theunisse added two more victories in 1988 and 1989. With eight wins in the first 14 battles, the Dutch have reigned supreme on Alpe d’Huez.

However, since Gert-Jan Theunisse took the last Dutch victory in 1989, Italians have threatened the House of Orange.

Except for American Andy Hampsten’s victory in 1992, Italians carried the day on Alpe d’Huez in the 1990s. Add the conquests from Gianni Bugno (2), Roberto Conti (1), Marco Pantani (2) and Giuseppe Guerini (1) to Fausto Coppi’s inaugural victory in 1952, and the Dutch Mountain moniker may soon be commandeered by gli azzuri.

The Success of Orange

Orange connotes strength, endurance and success. And within cycling, the orange Molteni jersey will always be recognized and associated with success.

Molteni won 663 races during its 18-year tenure in the peloton (1958-1976). One hundred sixty-one were taken by “The Cannibal” Eddy Merckx between 1971 and 1976, but Gianni Motta, Marino Basso and Michele Dancelli were a notable part of the team’s success too.

Along with these men, Rudi Altig, Herman Van Springel, Roger Swerts and Joseph Bruyère made Molteni the cream of the European peloton in the 1960s to mid-1970s. 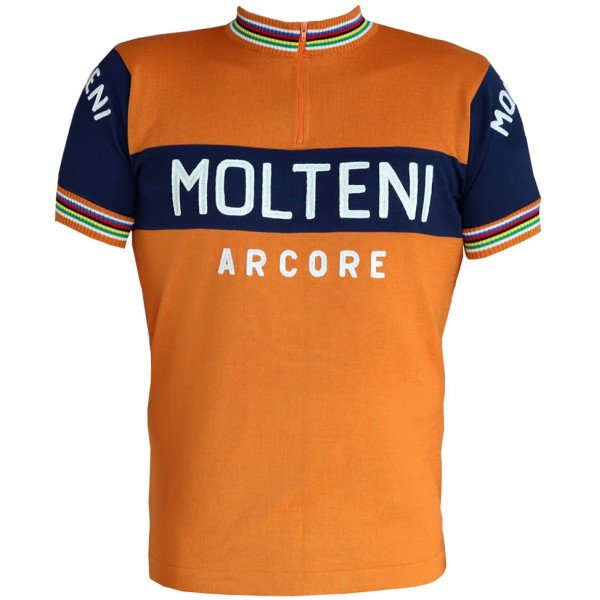 What Made the Molteni Jersey Iconic?

It wasn't all the Molteni wins or the longevity of the team. Icon status was bestowed because the jersey never changed.

For all the years and all the wins, the jersey never changed. "Aside from the occasional addition of an Italian shield, or an extension of the Molteni brand (Arcore, or Alimentari), the jersey was the same, year in year out."4 Always orange. Always successful.

The Determination of Orange

Orange represents determination, and The Cannibal was determined to win. Eddy Merckx, won 161 races wearing the orange jersey of the Molteni team from 1971 to 1976

In a 2007 article titled "Tour de France: An alternative view of the ultimate road race," Nick Brownlee addressed the legend of Eddy Merckx saying, “Merckx won the equivalent of a race a week for six years.

As a percentage of races undertaken, Merckx’ time in orange saw him regularly win a quarter to a third of the races he entered. In fact, in his best year (1971) Merckx won almost every other race he entered (45%). He was the epitome of determination, cycling strength and endurance and success.

"You need talent as a rider and I think I had that in my genes. But I think I also had a talent for suffering, which I thought was important, but also determination." — Eddy Merckx 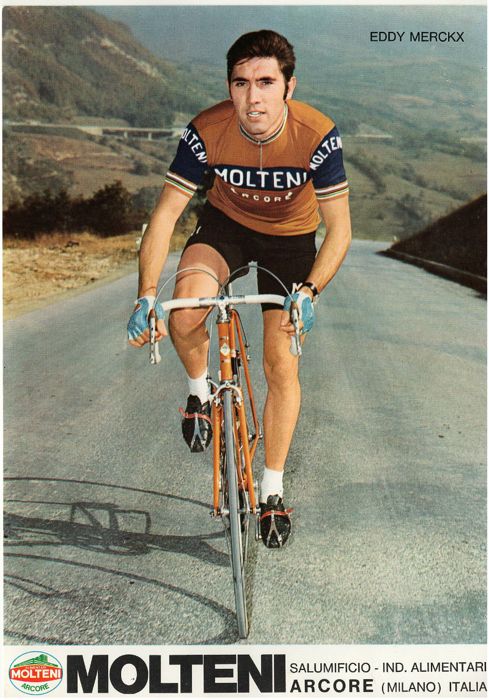 The Country of Orange

The Dutch national color is orange, and the Dutch reign over the women's peloton. 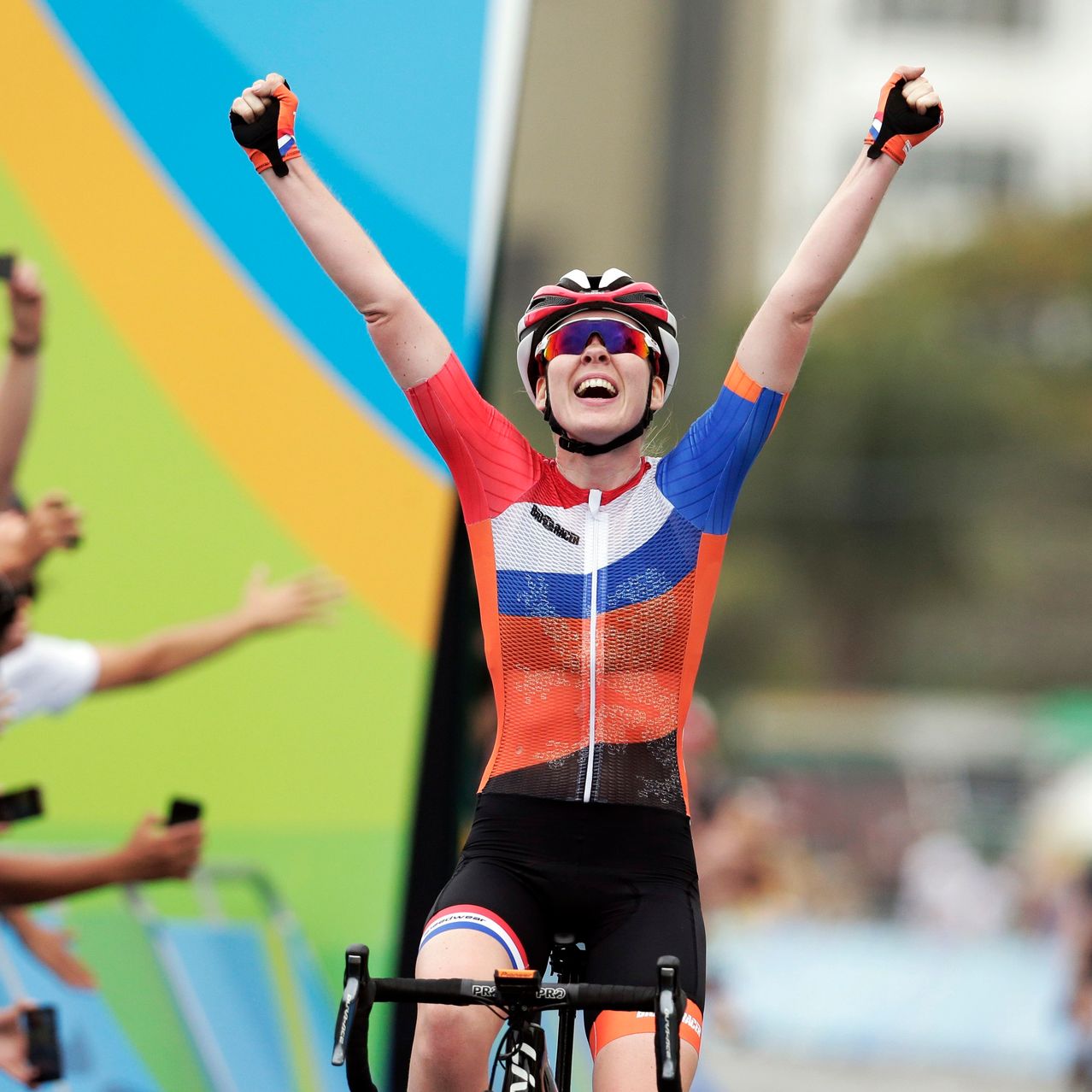 The Dutch are a transcendent superpower in women's cycling. They've always been strong. Enthroned atop the World Championship road race medals list, far ahead of second place, Dutch women have also conquered the Olympic road race four out of 10 times.

In 2018 alone, "Dutch riders and/or Dutch sponsored teams won two thirds of all Women's WorldTour races. They dominated the World Championships in Innsbruck, Austria, with a clean sweep of the podium in the individual time trial and a crushing victory in the road race."5

The Brands of orange

Strava is the largest sports community in the world. It has over 100 million athletes from nearly 200 countries in its orange embellished platform.

While Strava subscribers can currently record their efforts and exertions in more than 30 different activities, Strava began with cyclists. These pioneers of orange were called “avids”,6 and for Strava’s first years, the main “strivers” were cyclists.

Zwift, the immersive online cycling experience that allows cyclists to ride their bikes through virtual worlds with the sensations of in real life group rides, races and workouts is all about orange too.

And Continental, the multinational automotive and transportation company founded in 1871, brings the joy of orange to performance bicycle tires. The future of motion is orange.

The Fiction of Orange

A 2020 study by on the number of solo breakaways that have succeeded in the men’s peloton during the era of corporate teams and logo emblazoned jerseys revealed that solo flyers with orange as the predominant jersey color had a 71.9% greater chance of success than jerseys dominated by another color.

An Event of Orange

An event participants have called a "sufferfest" and a true test of mental toughness.

An event whose whose spokesperson is an inanimate stretch of road that considers itself relentless and unwavering.

Forza means strength — and force — but the imperative “FORZA!” means “Come on! Let’s go! You can do it!” It's an encouragement, a cheer, a call for success.

The 719 Ride in Colorado Springs is all that, and it's like an orange. 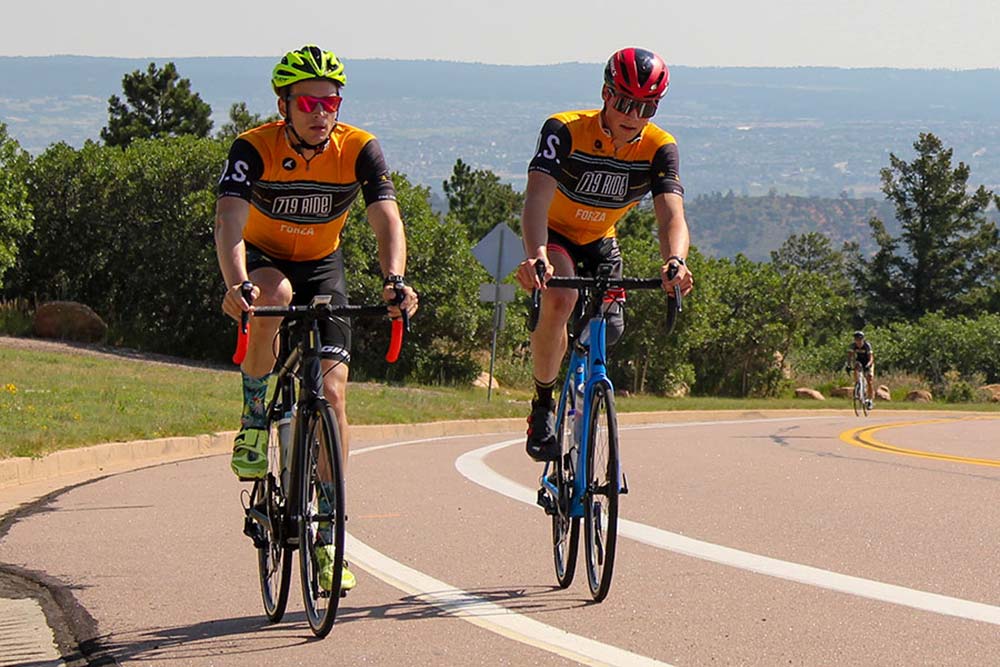 Oranges are juicy and invigorating. The 719 Ride is too. It's been described as intense pain and excellent fun.

Orange doesn't rhyme with any other word, and the 719 Ride isn't like a typical cycling event. It's low-cost, high-value, challenge-forward, story-led, great vibes with a savory-finish. It's got a course for everyone and abounds in bliss. It's a fine jaunt and is like gelato for the soul.

Finally, oranges are loaded with vitamin C and other nutrients to keep your body healthy, and the 719 Ride is loaded with hundreds of cyclists with healthy bodies and attitudes, many who wear an orange peel.

Beautify your body on the bike with A classic cycling orange peel. 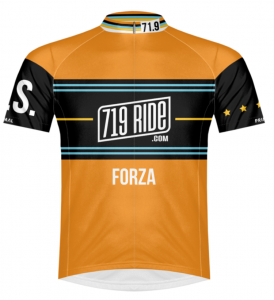 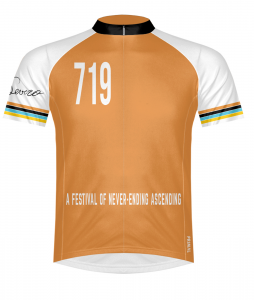 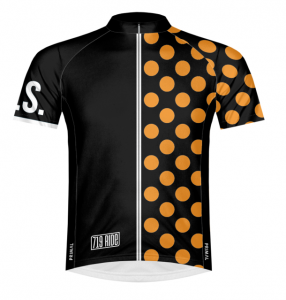 Cloak Yourself in Success and Orange Sweetness

1. Color psychology: What colors should you wear and why. Science of People. Retrieved November 7, 2021, from https://www.scienceofpeople.com/color-psychology/.

3. Bas, & Pim. (2021, August 22). Why is the national color of the netherlands orange? Netherlands Insiders. Retrieved November 7, 2021, from https://netherlandsinsiders.com/why-is-the-national-color-of-the-netherlands-orange/.

×
Scroll To Top
We use cookies for analytics, e-commerce and advertising purposes. The cookies allow us to understand how you use our site and to optimize your browsing experience. They don't contain any calories, so they won't affect your ability to ride uphill. However, we may share your site usage data with our social media, advertising and analytics partners. You agree to our use of cookies by closing this message box or continuing to use the site. I accept your cookies.I spit on your cookies.I want to read the privacy policy.