Pedalare! Pedalare! bills itself as “a history of Italian cycling from the appearance of the first bikes in Italy in the 1880s through to the birth of a mass, popular sport in the 1930s and 1940s and up to the present day.” Like the performances of the outstanding Gino Bartali, a champion in the era of champions, the tactical execution is a bit unbalanced and lacking at times.

Pedalare! Pedalare! presents its history chronologically with chapters set around rudimentary biographies of notable Italian riders that preface tales of racing and transition to the analysis of Italian society at the time.

However, Pedalare! Pedalare! is light on tales of racing, heavy on the analysis of Italian society, generous with introductions to notable Italian cyclists, including: Ottavio Bottecchia, Costante Girardengo, Alfredo Binda, Learco Guerra, Bartali, Fausto Coppi, Fiorenzo Magni, Gastone Nencini, and Felice Gimondi, and absorbed with The Golden Age of Italian Cycling. This lopsidedness is incongruent with the book’s billing, and it prevents the book from fully achieving its goal. 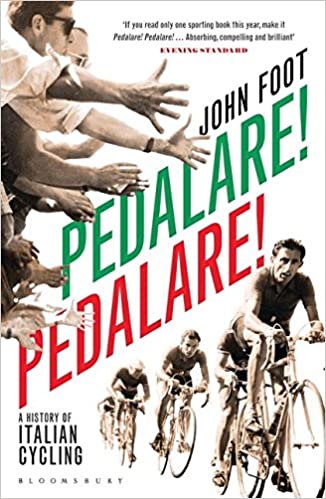 The author, John Foot, a professor of modern Italian history, dedicates little space to the modern era of cycling. The 1970s and 1980s are summed up in 10 pages which boil down the decades to a stale accounting of the rivalry between Francesco Moser and Giuseppe Saronni.

It’s surprising that in a book written in 2011 about Italian cycling, there is not a word about Michele Bartoli or Andrea Tafi, winner of eight Monuments between them in the late 1990s and early 2000s. Although, the author does acknowledge in the book’s introduction many worthy riders have been omitted from the story being told.

Even though Foot doesn’t intend to provide a comprehensive history of Italian cycling, despite what the publisher put on the book’s back cover, the cursory treatment of the the last four decades is unfulfilling and wanting.

Sprinter Mario Cipollini, the record holder for stage wins in the Giro d’Italia (42), gets a few perfunctory pages, and Alessando Petacchi, described as “one of the best Italian sprinters of the late twentieth and early twenty-first centuries, with more than 160 victories,” only gets a few sentences.

Paolo Bettini, two-time World Champion, Olympic Gold Medalist, and winner of five Classics receives the same treatment as Petacchi, albeit with one extra sentence. If Cipo, Ale-Jet, or Il Grillo had delivered those results in the 1960s would they have warranted more attention?

Foot’s focus on the modern era of Italian cycling capsulizes 30 years of history (1968 to 1999) into a 17-page chapter highlighting incidents of doping by Gimondi, Moser, Gianni Motta and even Eddy Merckx, who was leading the 1969 Giro d’Italia when he was disqualified for testing positive for the stimulant Fencamfamina.

Upon reaching the 1990s, Foot settles into recounting the ‘tragedy of Marco Pantani,’ the embodiment and greatest victim of The Age of Doping, before dedicating a similar amount of copy to the inefficiencies of the Italian judicial system in prosecuting Dr. Francesco Conconi. He references prominent Italian cyclists caught doping in the 1990s and 2000s (Francesco Casagrande, Danilo Di Luca, Ivan Basso, Dario Frigo, etc.) to make the point that nearly every cyclist of the time had been caught doping at one time or another and that the practice pervaded the era.

Despite the one-dimensional lens applied to the modern era, albeit an understandable lens, Pedalare! Pedalare! is worth the time to read. Like the gregari supporting Bartali and Coppi, Pedalare! Pedalare! is a faithful gregario to the champions interred in cycling’s canon. Not completely academic in its manner, there is much to gain from its pages although little thrill exists in them.

Magni’s incredible second place in the 1956 Giro, a placement he considered his “greatest win” despite three victories in the race (1948, 1951 and 1955), has no life to it. And the grit and stubbornness that propelled him to three consecutive wins in the Tour of Flanders is likewise mundane.

Learco Guerra’s incomparable World Championship victory in 1931, earned by time-trialing 172 kilometers with a fixed gear, is equally tepid because Pedalare! Pedalare! is an explanation of Italian cycling more than it is a celebration. The book prioritizes the context surrounding the cycling accomplishments, not the accomplishments and their stories.

Amidst the scholastic mentality infusing Pedalare! Pedalare!, the glory of Italy’s great champions still tantalizes. Cycling was Italy’s most popular sport for more than sixty years and Foot does an admirable job relating why, as well as explaining how cycling lost its allure and stopped being ‘the national sport.’ 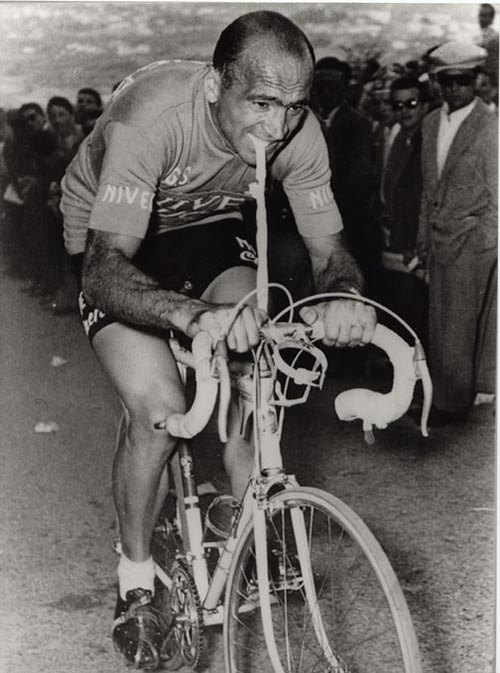 Fiorenzo Magni, 'The Third Man' in The Golden Age of Italian Cycling.

Pedalare! Pedalare! is like a school field trip to a museum. The information shared by the docent is interesting, but you know there is so much more to be told. The book offers a diverse and representative collection of stories that ultimately falters before it reaches the finish line.

Like a rider who falls out of the Top 10 during the final week of a Grand Tour, Pedalare! Pedalare! performs well, deserves respect, provides insight to build on, but doesn’t fully grab its opportunity.

Cycling was so important in twentieth-century Italy that it marked a generation, sparked fears of civil war, changed the way Italian was spoken, led to legal reform and even prompted the Pope to praise a cyclist from his balcony in St Peter's Square in Rome. Once so popular that it created the geography of Italy in the minds of her citizens via the annual Giro d'Italia, some have said that it was cycling and not political change that united Italy.

Pedalare! Pedalare! is the first complete history of Italian cycling to be published in English. Starting with the first Giro in 1909, it chronicles the tragedies and triumphs of great riders such as Fausto Coppi and Gino Bartali, whose bitter rivalry dominated the sport and came to symbolise the tensions between traditional Catholic Italy and the new modernity. From the poor peasants who took up cycling in the early, pioneering years, to the slick professional sport it is today, John Foot explores the changes in Italian society that were both reflected in and caused by this most popular of sports. Concluding with an examination of doping, which has helped to destroy what was at one time the greatest sport of all, Pedalare! Pedalare! is a tumultous history of a national passion.

Author Biography Inside the Book Cover

John Foot is Professor of Modern Italian History in the Department of Italian, University College London. He has published many books in Italy and in the UK and lives in London.

Follow @719Ride on Instagram
Posted in Book Reviews and tagged Alpe d'Huez, Cycling history, Tour de France
← Alpe d’HuezIt’s All About the Bike →
×
Scroll To Top
We use cookies for analytics, e-commerce and advertising purposes. The cookies allow us to understand how you use our site and to optimize your browsing experience. They don't contain any calories, so they won't affect your ability to ride uphill. However, we may share your site usage data with our social media, advertising and analytics partners. You agree to our use of cookies by closing this message box or continuing to use the site. I accept your cookies.I spit on your cookies.I want to read the privacy policy.