Distances and Challenges Suited to Everyone

Ride As Many Or As Few Laps As You Want. All Effort is Good Effort!

Forty-five percent of 719 Ride participants complete fewer than five laps of The Course That Cannot Be Defeated, which is our traditional and original course.

Whether you do two or three laps, ride just one, or work to subjugate one of our alternate courses, the 719 Ride will transport you from "The Couch of Potato" through "The Door of Personal Excellence."

Complete as many or as few laps of whichever course you want. Your registration doesn't care. It's the same reasonable price to ride [x] laps of our new GoldiLITE 719 course or our new 719 Ride SE route as it is to ride our signature distance on The Course That Cannot Be Defeated.

On event day, cut things short if gravity is stronger than normal. Add a lap if you're feeling stronger than normal. With the addition of the GoldiLITE 719 and the 719 Ride SE routes in 2023, you have more control than ever to define how much challenge and suffering your "sufferfest" serves up.

Regardless of whether you're riding The Course That Cannot Be Defeated for the first time or you're back to ride further or faster than in the past, the FESTIVAL OF NEVER-ENDING ASCENDING is a leg-bending challenge that you're in charge of.

There's no need chase the pain. The pain will come to you because repetitive inclines do exist in our Personal Challenge Rides. It's sort of our thing.

Register to Go Your Distance

I Cinque Giri: The Five Laps

This is our signature ride. I Cinque Giri. Five laps. 9,190' of elevation gain.

Inspired by the 2-5-10 Century in Emmaus, Pennsylvania, the 719 Ride has been taking cyclists on a merry-go-round of laps since 2016 and is one of the most challenging single-day cycling events in Colorado.

Originally imagined as five laps with at least 7,190' of elevation gain in 71.9 miles, I Cinque Giri (e ching-kway gee-ree) translates literally from Italian to The Five Laps.

Giri (gee-ree) comes from the Italian verb girare (gee-RAH-ray), which means "to turn." Hence the Giro d'Italia is not a Tour of Italy, like its yellow-jersey predecessor "tours" France as La Grande Boucle, The Big Loop. Il Giro is a "turn" of Italy, one lap or round of La Bell'Italia.

Over the course of its five laps, I Cinque Giri takes riders on a grand tour of repetition and elevates riders to heights both new and familiar.

Register to Ride The Five Laps 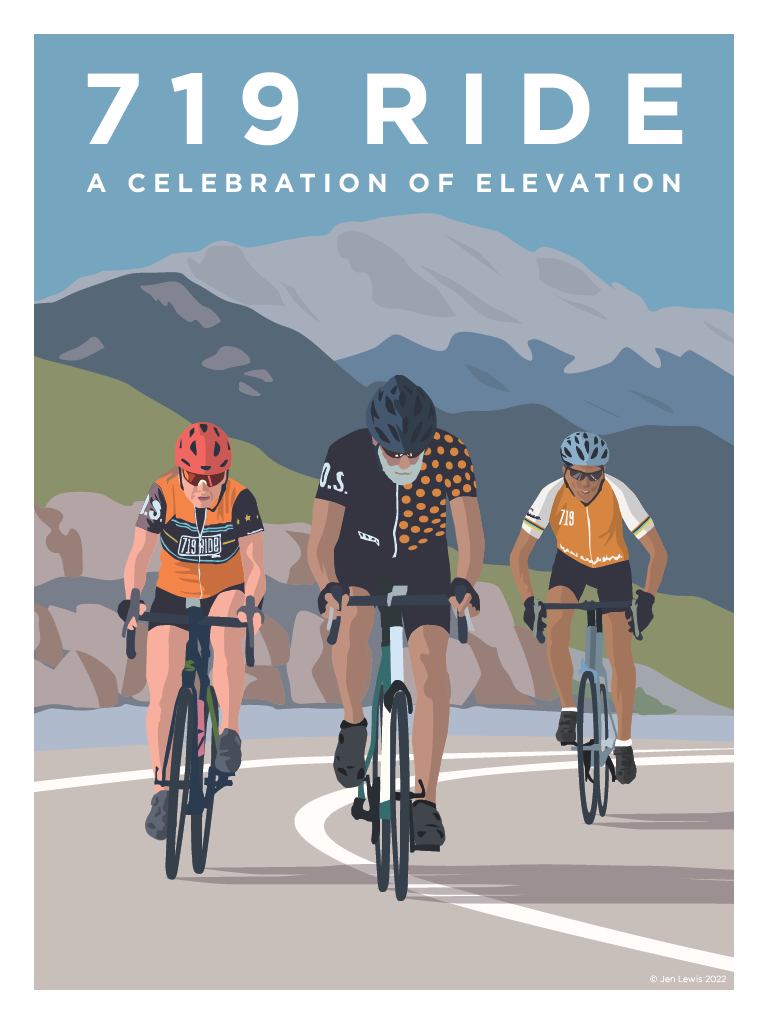 Add another level of climbing lunacy to your day with our Epic Elevation Quests (EEQ) or "eeks." Mere mortals tend to exclaim "Eek!" when they hear how much elevation gain is involved.

The smallest EEQ will have you geeking out about how much elevation gain you eked out with your gloriously thick quads, shapely calves and diesel engine glutes (11,028').

And The Queen of EEQs will have your knees creaking with enough elevation gain to fill your elevation bucket.

Register for an Epic Elevation Quest

How About These Apples?

Register to Ride Even More

All of Our Ride and Route Options are 100% Worth Doing!

They are The Door to Personal Excellence and The Yardstick of Quality. They also come with complimentary pain, difficulty, glory and the aforementioned F-U-N.

Cyclists participating in any of the 719 Ride options assume all responsibility and liability for their actions and own safety, and should obey all traffic laws.

All participants must sign the USA Cycling waiver of liability to participate in the event.