The Race by Dave Shields — “a novel of grit, tactics and the Tour de France” — isn’t a novel about cycling. It IS cycling!

It’s the sensations of the best ride of your life and the thrill of the most electrifying race you’ve ever watched.

It expresses the Tour drama of 1986 — Greg Lemond and Bernard Hinault. It divines Ben O’Connor’s stage nine Tour victory in 2021, and it simply feels right and just like Mat Hayman’s Paris-Roubaix in 2016.

The Race is a dramatic and exciting page-turner catching you in its draft and whisking you into the pro peloton despite the simplicity of the plot and its characters. 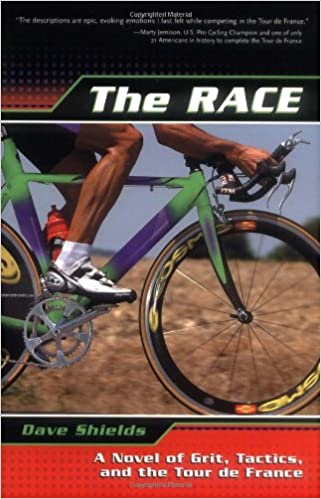 The book’s prologue starts The Race fast by attacking the protagonist, Ben Barnes, as he flies down a mountain pass in the Utah desert. Ben hits a damaged section of pavement while in a tuck and catapults over the handlebars. His momentum takes him over an embankment and down through ice, branches, rocks and thorns that mangle his body and bike. It also gives us the line we’ll follow through the rest of the book as Ben races the Tour battling uncertainty, insecurity and the all too familiar tension between a father and son around dreams and desires.

Ben’s backstory lacks originality and freshness, and his relationship with Kyle Smith, his racing antagonist, is one-dimensional. Smith is caricature fully predictable and without depth but he fulfills his literary role perfectly, as if he was a super domestique instead of the General Classification favorite he's written as. Smith brings tension and cultivates disdain brilliantly enriching the climax atop Alpe d’Huez.

The more villainous Pierre, Le Directeur Sportif of Banque Fédérale, plays the stereotype of controlling D.S. with panache. He is heavy-handed, egotistical and a mean-spirited impediment to Ben. When his machinations get foiled, it’s as magnificent as a doping injustice being punished.

Shields’ descriptions of riding and racing carry the book to glory. They are both stirring and enlivening, and Marty Jemison, U.S. National Road Race Champion and two-time participant in the Tour de France, called Shield’s descriptions epic and spot on, evoking emotions Jemison felt when he raced the Tour in the late 90s.

Like an action movie that successfully walks the line between utterly ridiculous and pure awesome entertainment, the slight shortcomings of The Race quickly and completely fade amid the redemption, glory and honor Shields hit us with.

It’s the emotion of Matthieu van der Poel winning stage two of the 2021 Tour de France and pulling on the maillot jaune in honor of his grandfather, cycling’s Eternal Second, the beloved Raymond Poulidor. And it’s the energy and emotion of Mark Cavendish winning stage four of the 2021 Tour after a five-year hiatus in Tour stage victories, when most everyone in cycling thought him done.

The Race tells a story about the power of dreams, belief in oneself and faith in others. Its wholesome message esteems resilience, perseverance, determination, and trust. It’s a rich and rewarding read that grabs the yellow jersey in the first week of the race, atop Alpe d’Huez, and wears it all the way to Paris.

Consider The Race to be Jan Ullrich in 1997. As a domestique to 1996 Tour champion Bjarne Riis, Ullrich put on an incredible display of power in the 10th stage to take the yellow jersey. The Tour is then Jan Ullrich in 1998, finishing second, 3 minutes and 21 seconds down on Marco Pantani. A strong and admirable effort but not quite the same as the first effort.

Sheer tenacity has earned Ben Barnes the opportunity to ride in The Tour de France. He rises to every challenge, earning the admiration of his teammates, but there are also powerful forces aligned against him. When disaster strikes Ben is forced to confront both himself and his past more directly than he ever before dared.

What follows leaves the readr as white-knuckled as a cyclist plummeting down a serpentine descent. The Race careens around hairpin turns and sprints up daunting ascents as ben rides to keep his word and regain his honor.

Author Biography on the Book Cover

Dave Shields is an accomplished writer and long-time endurance athlete. He lives in salt Lake City, Utah with his wife and two daughters.

Follow @719Ride on Instagram
Posted in Book Reviews and tagged Fiction, Tour de France
← A Race for MadmenThe Tour →
×
Scroll To Top
We use cookies for analytics, e-commerce and advertising purposes. The cookies allow us to understand how you use our site and to optimize your browsing experience. They don't contain any calories, so they won't affect your ability to ride uphill. However, we may share your site usage data with our social media, advertising and analytics partners. You agree to our use of cookies by closing this message box or continuing to use the site. I accept your cookies.I spit on your cookies.I want to read the privacy policy.