The Tour de France is about stress and concentration that exhausts. It’s about anxiety and apprehension, mental fatigue and the execution of strategy in an unstable, ever-changing environment. The Tour According to G is the inside story of Geraint Thomas’ 2018 Tour de France victory. His experience, in his own words, told stage by stage, in detail and with commentary. It is insightful, honest, enjoyable, and worthy of the yellow jersey.

Thomas loads each chapter with tactical analysis and explanation and a constant stream of anecdotes. He offers bits of insight and perspective on riding with Chris Froome as a protected rider but not the designated leader and is straightforward, practical and complimentary in doing so. 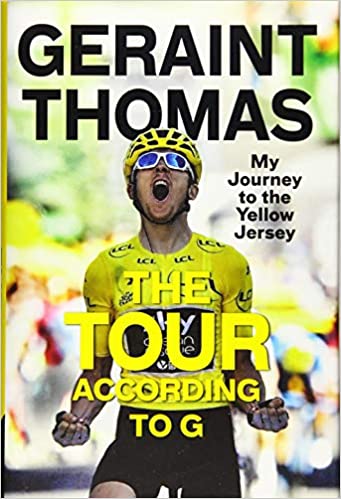 In the early stages of the 2018 Tour, the Alps loom large. Until the Alps arrive to “sort things out,” their approach dictates strategy and stage tactics for the General Classification (GC) contenders. Thomas talks where to be in the peloton and when; on the flat long stages, on the Mûr, approaching the sprint finish, and in the pavé secteurs. Saving bullets, not expending more energy than necessary.

When the Mûr arrives in Chapter 5, Thomas compares the great cathedral of Brittany (2 kilometers long and 6.9% average gradient) to Alpe d’Huez.

“A long climb like Alpe d’Huez is like that Chinese burn, a gradual ratcheting up of the pain until you want to yell out. The Mûr is a blister that appears fast and quickly turns bloody.”

And Thomas’ description of the pavé in Chapter 7 is how he experiences the cobbles. It’s distinct, lovely, brutal and traumatic.

“Uneven, unpredictable, a bone-shaking demolition derby that favours the strong and the brave and the lucky and punishes the scared, cautious and skinny. These were not the smooth little bumps found in old market towns back home. They stuck up and they stopped tyres, closer to the shape of a melon or a baby’s head . . . They aren’t laid nicely side by side. It’s as if a truck has driven down a field and some bloke has just thrown them off of the back as he’s gone along.”

That’s the cobbles according to G.

Chapter 10 is The Alpe. From the alluring thrill Alpe d’Huez had for Thomas as a child to the sober calculations it requires from him as a pro, Thomas conveys a stage ripe with tension and excitement. It reads like a race day recap, including Team Sky’s pre-race plan, Steven Kruijswijk’s break, Froome’s attack with four kilometers to the summit, Vincenzo Nibali’s crash, catching Kruijswijk with two miles to go, and the thoughts going through Thomas’ mind throughout it all.

Thomas’ victory “wasn’t a breakaway that the better riders had let go. It wasn’t a late escape that had no effect on the GC. It was the best riders in the race, repeatedly attacking each other, everyone going for it, everyone on the limit.” The strongest rider doesn’t always win the Tour de France, but in 2018 Thomas was the strongest. And he emphasized the point with palms up, fists clenched and a victorious roar as he won on Alpe d’Huez in the maillot jaune. 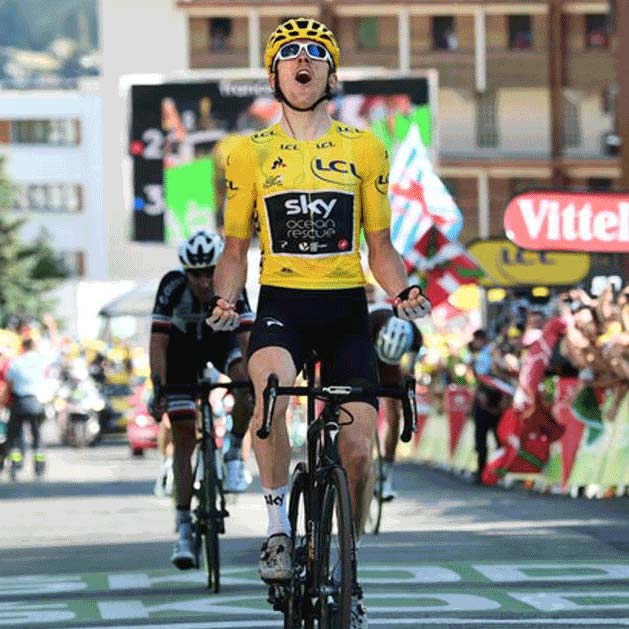 For years Geraint Thomas appeared blessed with extraordinary talent but jinxed at the greatest bike race in the world: twice an Olympic gold medallist on the track, Commonwealth champion, yet at the Tour de France a victim of crashes, bad luck and his willingness to sacrifice himself for his team-mates.

In the summer of 2018, that curse was blown away in spectacular fashion – from the cobbles of the north and the iconic mountain climbs of the Alps to the brutal slopes of the Pyrenees and, finally, the Champs-Élysées in Paris.

As a boy, G ran home from school on summer afternoons to watch the Tour on television. This July, across twenty-one stages and three weeks, and under constant attack from his rivals, he made the race his own.

With insight from the key characters around Geraint, this is the inside story of one of the most thrilling and heart-warming tales in sport.

Not only can nice guys come first – they can win the biggest prize of all.

Author biography from the book cover

Geraint Thomas MBE is the winner of the 2018 Tour de France, a double Olympic gold medalist and multiple world champion who has been an indispensable part of Team Sky since its inception. A Tour de France veteran, he had both completed the entire race with a fractured pelvis and been essential in piloting Chris Froome to the yellow jersey multiple times before his own win.

One of the most popular men in the peloton, he has watched and contributed from the inside as British cycling has been transformed over the past decade. In 2014 he won Commonwealth road race gold in Glasgow and was voted BBC Wales Sports Personality of the Year. In 2015 eh became the first British rider to win the E3 Harelbeke: in 2016 he won Paris-Nice and early 2018 won the Critérium du Dauphiné.

Follow @719Ride on Instagram
Posted in Book Reviews and tagged Alpe d'Huez, Tour de France
← The Tour is Won on the AlpeÉtape: 20 Great Stages From the Modern Tour de France →
×
Scroll To Top