The Tour by Dave Shields’ is the follow-up novel to The Race, a story about dreams, determination and perseverance that plays out during the Tour de France.

The book picks right up where its predecessor left off. It’s now stage 11. The peloton is cruising through the outskirts of Bourg d’Oisans after the previous day’s excitement on Alpe d’Huez. Will Ben Barnes, Banque Fédérale domestique turned Tour contender, take overall victory in Paris when the Tour concludes or will one of his rivals finish in yellow?

Shields’ holds the race’s drama closely and tightly in the story. He’s attentive and disciplined like a General Classification (GC) rider, and his simple yet vivid descriptions of cycling tactics and strategy move the story along quickly and effortlessly — as if we’re a GC favorite riding behind our teammates to conserve energy. 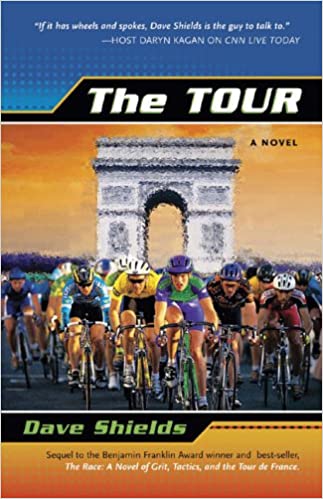 The excitement of The Tour builds stage by stage and chapter by chapter, serving up exhilaration and disappointment as Ben takes time from his rivals and experiences misfortune. The drama and spectacle climax on the Champs-Élysées, but not at the line in a cliché as you might expect and fear. It finishes well and admirably. It’s both realistic and satisfying.

While The Race was a story about the power of dreams, belief in oneself and faith in others, The Tour is more about the pressure to dope to win. The backdrop of both books is La Grande Boucle, but it feels like The Race was more about the Tour whileThe Tour differentiates itself by focusing on the presence of performance enhancing drugs in the peloton.

The Race embraced the allure of Le Tour, and the purity of the toil, sacrifice and suffering of its riders. It communicated the unadulterated sense of theater that draws us into the race, captures our attention, and causes us to view it with affection and view the riders with esteem.

The Tour has a bit of that too, but the focus is Ben’s resistance to taking performance enhancing drugs to increase his chance of overall victory. The threats from the team owner to pull Ben out of the race and his efforts to actively sabotage Ben’s chance of winning seem inauthentic. But as with 1998 Festina Affair, sometimes the drama of doping overshadows the racing, and the motivation behind some behavior is hard to understand.

Performance enhancing drugs isn’t a subject that was mentioned at all in The Race (i.e., the first 10 stages of this fictional Tour). But in The Tour it has a central role. The arrival feels dissonant and jarring — like the emotion of July 8, 1998 and the arrest of soigneur Willy Voet at the French-Belgian border with large quantities of erythropoietin (EPO), growth hormones, testosterone and amphetamines.

The Race is Jan Ullrich in 1997. As a domestique to 1996 Tour champion Bjarne Riis, Ullrich put on an incredible display of power in the 10th stage to Arcalis (not Alpe d’Huez) to take the yellow jersey and leadership of Telekom. Ullrich went on to win the Tour de France by more than 9 minutes over Richard Virenque.

The Tour is Jan Ullrich in 1998, finishing second, 3 minutes and 21 seconds down on Marco Pantani, in a doping marred Tour de France.

Ultimately, The Tour is a fun, fast, and entertaining tale celebrating cycling and the Tour de France while acknowledging a sad part of cycling's past. It charges into Paris fighting for yellow, finishes with a strong second place and captures the “super-combatif” award, the prize for the most combative rider during the race.

Ben Barnes is on a quest to win the Tour de France. Along the way he confronts obstacles greater than he ever imagined, but it is the specter of illegal performance enhancing drugs that truly shakes him. In The Tour, readers experience the complex pressures and challenges posed by these substances from the perspective of a professional athlete. Can Ben overcome adversity to experience victory in “The City of Love”? Join him as he races over the back roads of France to find out.

Author Biography on the Book Cover

Dave Shields is a Benjamin Franklin award-winning writer and avid endurance athlete. He lives in Salt Lake City, Utah with his wife and three daughters.