Promising to bring “the excitement, the magic, the madness and the glory of the Alpe . . . to magnificent life” Jean-Paul Vespini’s The Tour is Won on the Alpe reads like a staid journalistic recounting of each Alpe d’Huez Tour de France stage through 2006. It isn’t particularly exciting or magnificent. It’s more akin to Frenchman Ronan Pensec, as related by Vespini in Chapter 15 (1990: LeMond and Bugno to the Line) — unfulfilled potential.

In 1990, Pensec finished 10th on Alpe d’Huez, and “all of France began to dream of yellow, pinning its hope on this Breton from the same stock as the 1947 winner, Jean Robic.” But Pensec’s chance for overall victory crumbled the following day when he finished 3:50 behind winner Erik Breukink in the Villard-de-Lans time trial. This stamped Pensec with “that most damning of labels, ‘unfulfilled potential.’”

Although the book doesn’t fulfill its book-flap promise, it still puts in a strong performance, like a dedicated gregario or domestique riding in support of his team leader. It’s a performance worth a top 10 stage placement. 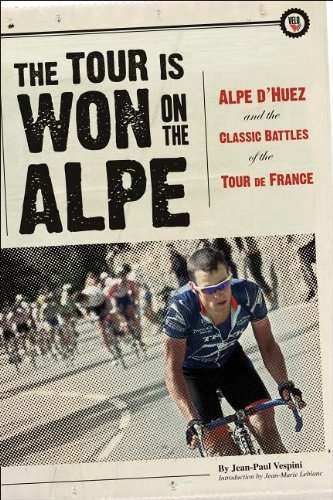 The narrative more factual than expressive doesn’t reveal “stories to savor,” as mentioned on the book cover, but more rekindles familiar flames with heroes of glory past. In its pages, we experience anew Marco Pantani’s record-setting ascent in 1995 and Lance Armstrong’s “Look” at Jan Ullrich in 2001.

As Vespini lit upon memories and emotions planted by Tours in the eighties, nineties and oughts, he reinvigorates the great duel between Bernard Hinault and Greg LeMond in 1986, the Gianni Bugno/LeMond sprint finish at the summit in 1990, the only such finish at the Fortress of L’Oisans, and Andy Hampsten’s rabbit-like effort in 1992. We time-trial with Armstrong through the 2004 stage, reimagining the effort and feeling the sensations. In this regard, the book was simply a conduit releasing past excitement.

Thanks to Vespini, we can create imagery for Fausto Coppi and his “battle to the heavens” with Robic and Eddy Merckx and his “moment of mortality” on l’Alpe in 1977. But these “heroes to admire” aren't found within the book. Instead, we gained details that made legends of Il Campionissimo and The Cannibal; riders who raced before long ado.

However you experience Vespini’s catalog of history about the Platform of Huez and its 21 bends The Tour is Won on the Alpe is an admirable book; the best part being the four-page spread of stage finish photos for each year. 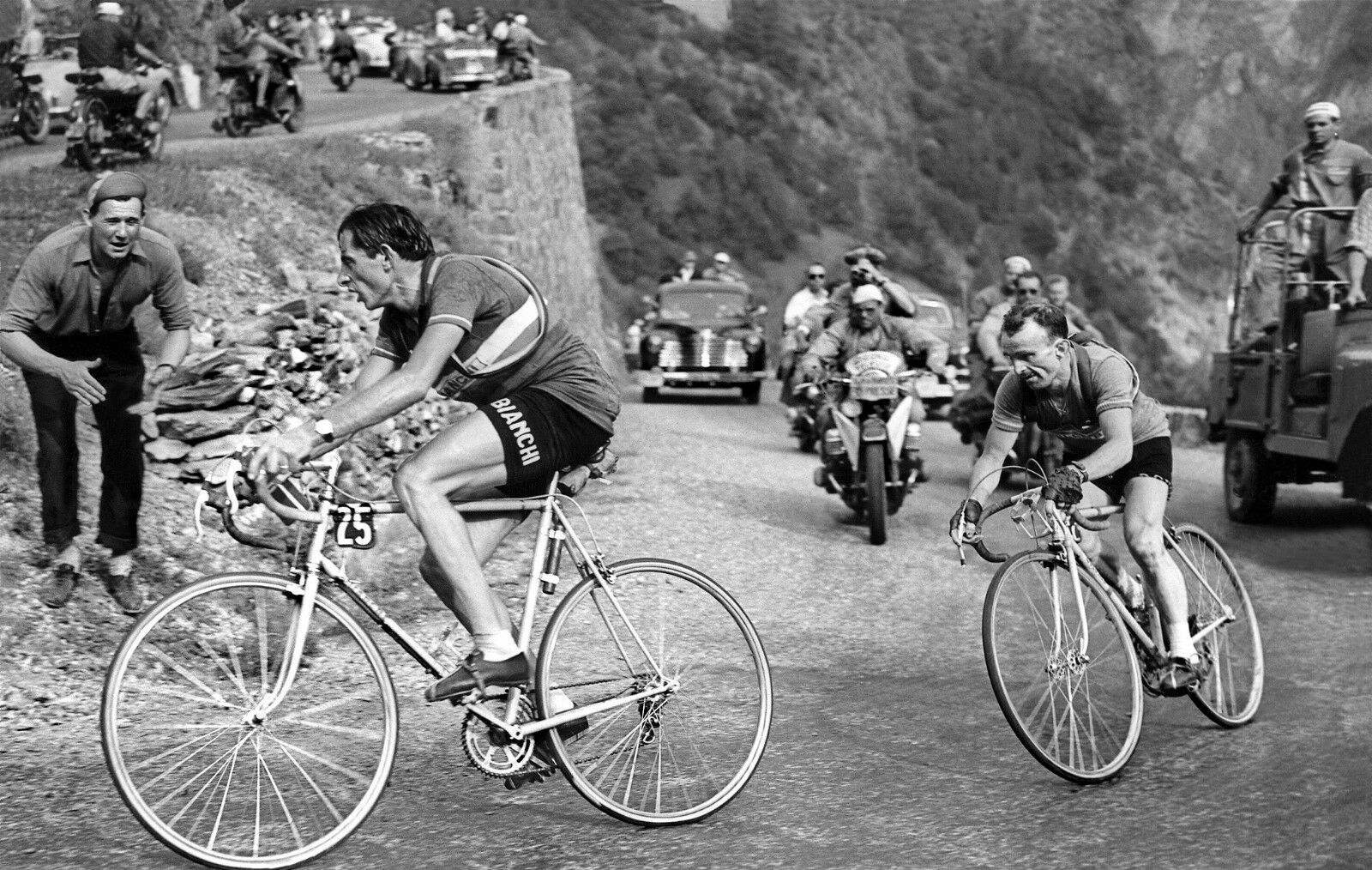 Fausto Coppi and Jean Robic battle to the heavens.

Overall, The Tour is Won on the Alpe falls short of a top three placing in Paris, although Vespini does grab a stage win or two en route. His work is a great summary of the Mountain Temple and its Tour de France escapades, which allows you to approach l’Alpe at your desired speed and cadence.

You can read it all the way through, like riding in a Grand Tour, to get the fullest sense of the mountain and the Tours it has hosted, or you can sprint to a certain year to relive a specific memory or moment.

You can animate the read by jumping from year to year to follow a particular rider’s l’Alpe palmarès or attack the years preceding an iconic moment to flesh out the context that informed it.

Beyond the history Vespini puts to story, the book is a good old school, non-Internet resource for statistics and information about Alpe d’Huez.

Appendix A lists all the ascents through 2006, including the top 10 finishers on each stage, the top three overall finishers for each year and the winners of the green, polka dot and white jerseys.

Appendix B catalogs the fastest ascents, the most victorious countries, the most frequently used “warm-up” climbs, the biggest margins of victory, and numerous other statistics.

Ultimately, The Tour is Won on the Alpe is an interesting reference text about Alpe d’Huez and the Tour de France presented in the form of journalistic storytelling. As previously said, it’s a performance worth a top 10 stage placement but not the podium in Paris. 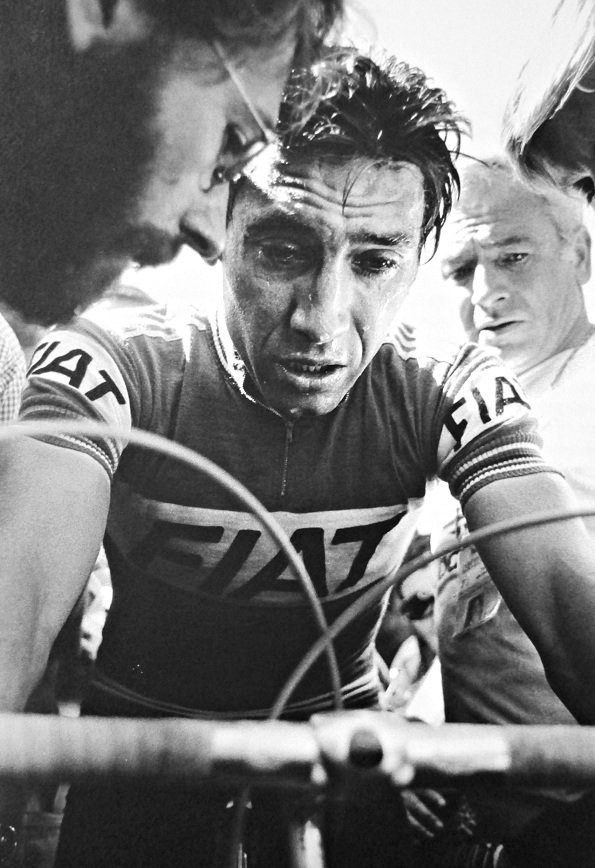 The mortal Eddy Merckx at the summit of Alpe d'Huez in the 1977 Tour de France.

Nearly every July, in France’s torrid summer heat, the finest cyclists in the world attack the fearsome challenge of Alpe d’Huez, a monster of a mountain that has become the Tour de France’s legendary rite of passage. The racers climb the Alpe’s 21 switchbacks through a deafening corridor thick with fans numbering in the hundreds of thousands—fans who have camped for days alongside the mountain’s narrow road to witness one of the greatest spectacles in sport.

In The Tour is Won on the Alpe, veteran journalist Jean-Paul Vespini brings the excitement, the magic, the madness, and the glory of the Alpe—as well as the Tour itself—to magnificent life. Each chapter in his tightly told tale covers one ascent, starting with Fausto Coppi’s inaugural victory in 1952. The sport’s most famous names and the epic battles they fought are all present and accounted for: Eddy Merckx, Bernard Hinault, Miguel Indurain, Marco Pantani, and of course the American greats Greg LeMond, Andy Hampsten, and two-time Alpe stage winner Lance Armstrong.

Cycling fans and lovers of sport alike will find stories to savor, heroes to admire, and stunning feats of athleticism to celebrate. They are the stories that made headlines in cycling’s most famous annual event.

Author biography from the book cover

Jean-Paul Vespini has covered the Tour de France for 19 years as a correspondent for Le Cycle and Cyclisme International. The author of numerous reference texts on cycling, he also collaborated with Richard Virenque on his best-selling autobiography. He lives in Marignane, France.

Follow @719Ride on Instagram
Posted in Book Reviews and tagged Alpe d'Huez, Cycling history, Tour de France
The Tour According to G →
×
Scroll To Top
We use cookies for analytics, e-commerce and advertising purposes. The cookies allow us to understand how you use our site and to optimize your browsing experience. They don't contain any calories, so they won't affect your ability to ride uphill. However, we may share your site usage data with our social media, advertising and analytics partners. You agree to our use of cookies by closing this message box or continuing to use the site. I accept your cookies.I spit on your cookies.I want to read the privacy policy.